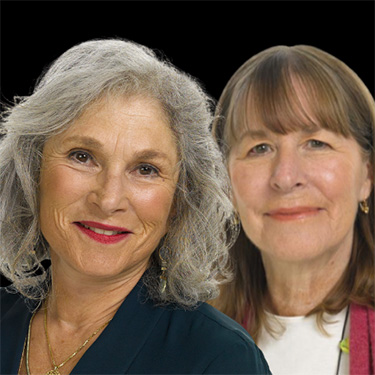 Vermont Business Magazine Hinda Miller and Polly Smith—fellow NYU stage design graduates—have led remarkable, multi-act lives. Miller has been a successful entrepreneur and a Vermont state senator; Smith is a famed costume designer and eight-time Emmy winner. But their professional lives intersected in 1977 at a Shakespeare Festival in Lake Champlain, Vermont. That’s where Miller and Smith—along with Smith’s lifelong friend Lisa Lindahl—came up with the idea that changed women’s sports, and the ready-to-wear apparel industry, forever: the Jogbra.

They've both been named New York University Changemakers for 2022.

“There was nothing out there for women runners,” Hinda Miller said in the NYU announcement.

The women weren’t competitive athletes, but as theater designers, they knew how to solve problems.

“It had to be pulled on and off easily,” Polly Smith says. “Straps that didn’t slip, no complicated design features, no chafing.”

The women famously sewed the first prototype together from two men’s jockstraps. When Lindahl and Miller took it for a test spin, they knew they were onto something. Smith returned to New York and hunted down materials to create a more convincing prototype.

That’s where Smith and Miller’s paths diverged. “At some point,” says Smith, “I was ready to hand things off to Hinda. I knew my life would be in theater.” As Smith was discovering a career designing costumes for The Muppets, Miller and Lindahl were building Jogbra from a tiny two-woman company with $5,000 in seed money into a corporate juggernaut. “We had no idea how to be businesspeople,” Miller says. “We just took things one problem at a time.” By the time they sold the company to Playtex Apparel in 1990, the sports bra apparel-category was a global, multi-billion dollar industry—and a cornerstone of women’s athletic gear.

Miller and Smith have been inducted into the National Inventors Hall of Fame, and prototypes of the Jogbra are enshrined in the National Museum of American History and the Smithsonian.

Polly Smith marvels at the accomplishment. “I have been so lucky in life,” she says, “to so often be in the right place at the right time.”

And although Miller eventually left corporate life to bring her advocacy for women to the Vermont state senate, she remains proud of what she, Smith, and Lindahl hatched in Lake Champlain all those years ago.

“My values,” she says, have always been about women and women’s choice. That’s what the Jogbra was for me.”

These are the qualities that unite this class of NYU Alumni Changemakers—a selected group of NYU alumni whose accomplishments help build a better world.

Chosen by the NYU Alumni Association Board from crowdsourced nominations, these alumni are the best of the best: entrepreneurs and visionaries who save lives, reduce suffering, and bring hope to the marginalized.