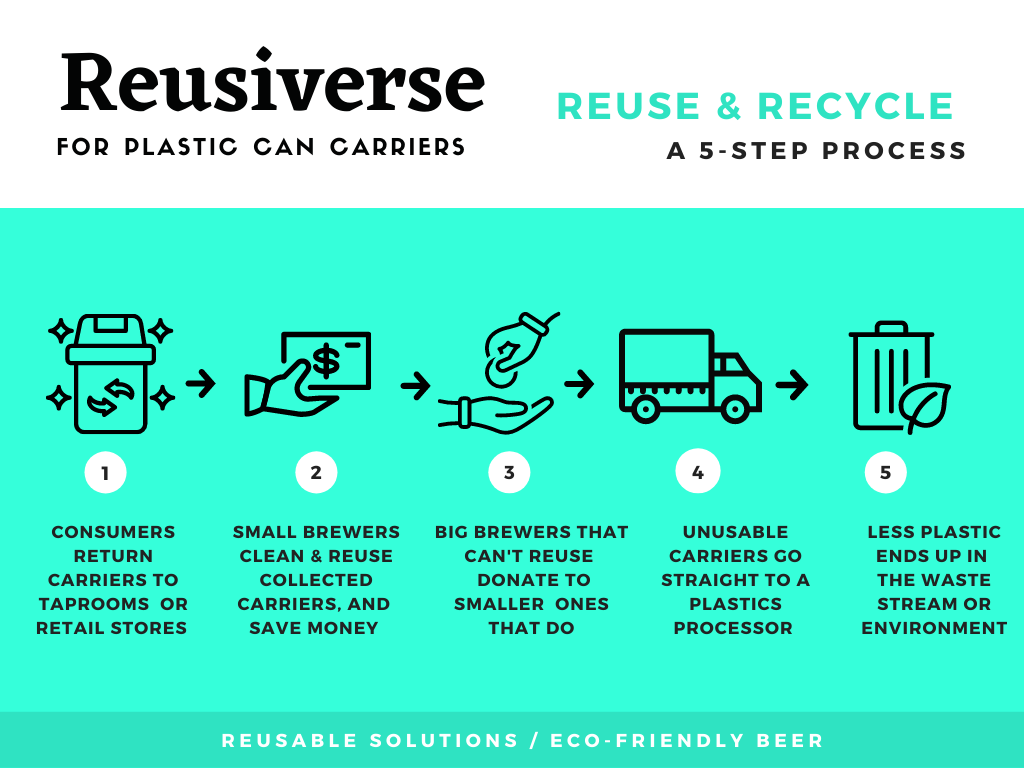 Vermont Business Magazine Millions of plastic can carriers end up in the hands of Vermont’s craft beer and cider drinkers each year, with most being tossed into single-stream recycling bins because manufacturers market them as “100% recyclable.” What craft beverage producers, recycling companies, and some consumers have come to realize, however, is that while such marketing claims may be true in theory they don’t always hold up in reality.

A new collaborative effort between Reusable Solutions, Eco-Friendly Beer, and Casella Waste Systems aims to implement a more sustainable system that extends the life of the rigid plastic packaging beyond just single use.

Known as the Vermont Plastic Can Carrier Reuse & Recycle Initiative, its goal is to reduce the need for new carriers by offering taproom take-back programs that allow the ones already in circulation to be used over and over again.

The concept isn’t new. Businesses like Burlington’s Queen City Brewery, Black Flannel Brewing & Distilling in Essex, and even renowned Hill Farmstead already accept carriers back from customers for sanitization and reuse. Not only is it more environmentally conscious than buying new carriers that get used just once, it’s also more economical. Reusing them decreases packaging costs for some breweries by hundreds or even thousands of dollars annually.

The idea behind the Metro Burlington pilot program is to scale up existing reuse efforts by raising awareness about the benefits, and by creating a more formalized network of participants and stakeholders including beer and cider producers, consumers, and various environmental groups. One of  the initiative’s more innovative approaches is the creation of an interactive map that helps consumers locate their nearest take-back location. Among its more novel approaches is an effort to emulate what Green Up Vermont has done to promote environmental stewardship in the state, perhaps by recruiting some of its volunteers to help sort and deliver rescued carriers to breweries and cideries that will clean and reuse them.

Casella will also help participants ensure that unusable carriers (those that are  damaged or in excess) get properly recycled through a special arrangement that side steps single-stream collection programs that require mixed recyclables to be sorted when they arrive at a material recovery facility (MRF). Depending on which MRF they end up at, the capture rate of plastic can carriers (and their likelihood of actually getting recycled) can vary significantly. The unique separate-stream collection arrangement offered by Casella ensures that all unusable carriers collected by participating businesses get to a plastics processor for proper recycling.

If the pilot proves to be a success, the Vermont Plastic Can Carrier Reuse &  Recycle Initiative could be formally expanded to the rest of the state as soon as early 2022. Chuck Soucy, Cellar Manager and Sustainability Director at Brattleboro’s Hermit  Thrush Brewing (which also has a take-back and reuse program), has expressed  optimism about a state-wide roll out. Also chair of the Vermont Brewers Association’s  Sustainability Committee, he plans to present the idea at a future member meeting.

For more information or to get involved in the Vermont Plastic Can Carrier Reuse &  Recycle Initiative as a business participant or sorting/delivering volunteer, contact Rob Vandenabeele at EcoFriendlyBeerDrinker@gmail.com or Ben Kogan at ben@ReusableSolutions.co.

The EcoFriendlyBeer.com website was founded in early 2020 to spur discussion and  share insights on how the craft brewing industry and its consumers can better protect  our Earth, the only planet with craft beer. Its founder is currently enrolled in the  Sustainability Studies program at Harvard Extension School and offers consulting for  the craft beverage industry.

Reusable Solutions is an outreach organization that focuses on eradicating single-use  plastic and fighting climate change. Its founder believes that innovative business and smart  environmental policy are the most effective means to transition from a linear to a circular economy. Part of this transition is connecting reusable and renewable businesses with consumers through a community-based, grassroots process.