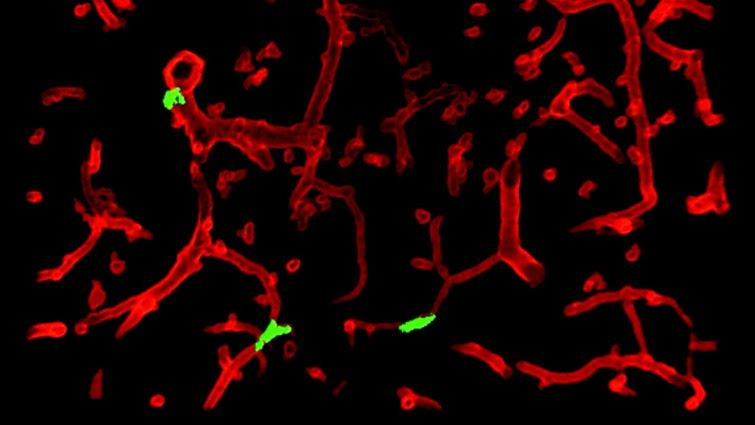 Calcium (indicated in green) lines the blood vessels (red) in the brain in this image. (Courtesy of UVM Department of Pharmacology.)

Findings reveal how blood flow is fine-tuned within the brain

Vermont Business Magazine Unlike the rest of the body, there is not enough real estate in the brain for stored energy. Instead, the brain relies on the hundreds of miles of blood vessels within it to supply fresh energy via the blood. Yet, how the brain expresses a need for more energy during increased activity and then directs its blood supply to specific hot spots was, until now, poorly understood.

In a new paper, published today in Science Advances, University of Vermont and University of Maryland researchers have shown how the brain communicates to blood vessels when in need of energy, and how these blood vessels respond by relaxing or constricting to direct blood flow to specific brain regions.

Understanding how the brain directs energy to itself in intricate detail can help determine what goes wrong in conditions like Alzheimer’s disease and dementia, where faulty blood flow is a predictor for cognitive impairment. If the brain does not get blood to where it needs it when it needs it, the neurons become stressed and over time they deteriorate, ultimately leading to cognitive decline and memory problems.

Large arteries feed medium-sized vessels known as arterioles that then feed even tinier capillaries—so small that only a single blood cell can pass through at once. In a 2017 Nature Neuroscience paper, the researchers showed that electrical pulses coursing through the capillaries direct blood flow from the medium-sized arterioles supplying large regions of the brain. For this latest paper, the team wanted to study the fine-tuning of blood as it flows through the capillaries to precisely regulate energy supply to tiny regions in the brain.

"Capillaries were traditionally thought of as simple conduits for red blood cells, and the barrier between the blood and brain," says University of Vermont Distinguished Professor and Chair of Pharmacology Mark Nelson, Ph.D., co-senior author on the study. "Here, we revealed an unknown universe of calcium signaling in capillaries, and much like traffic lights, these calcium signals direct vital nutrients to nearby active neurons."

“By providing detailed understanding of calcium signaling and electrical signaling in the brain, we extended prospects to precisely understand how functional mechanisms get disrupted in neurodegenerative diseases and what can be future druggable targets” says co-first author and UVM Assistant Professor of Pharmacology Amreen Mughal, Ph.D.

The researchers used a protein that emits green light when calcium increases in the cell. Due to the efforts of Michael Kotlikoff’s team at Cornell University, they were able to turn this tool on in the cells lining the blood vessels of mice. The team then looked through little windows in the brains of these mice to investigate calcium’s role in controlling blood flow in the brain’s capillaries. When calcium increased in the capillaries, they glowed green. Th researchers detected 5,000 calcium signals per second in the capillaries in the tiny section of brain visible through the window, which they say amounts to about one million of these responses each second in the entire brain’s blood vessel system.

The researchers then dissected the intricate cellular mechanism behind calcium’s role in directing blood branch-by-branch through the tiny vessels of the brain. They found that when neurons fire electrical signals, they cause an increase in calcium in the cells lining the blood vessels. Enzymes detect this calcium and direct the cells to make nitric oxide. Nitric oxide is a hormone (and a gas) that causes muscle-like cells around blood vessels to relax, which then widens the vessels, allowing more blood to flow in.

“As we refine our understanding of how the brain fine-tunes the delivery of blood, we have the opportunity to study how subtle defects in this mechanism may slowly starve nerve cells of essential resources, leading to neurodegenerative disorders such as Alzheimer’s and dementia” says Dr. Grant Hennig.

(This news release was adapted from a news release produced by Vanessa McMains, Ph.D., at the University of Maryland.)

Larner College of Medicine at the University of Vermont 7.21.2021 Burlington