Vermont Business Magazine In a new study, SmartAsset analyzed data to find the states with the largest rainy day funds as of 2019. Vermont ranks among the top 10 states. Vermont had the highest ranking in the Northeast. SmartAsset is a national, personal finances assistance firm.

The coronavirus pandemic has drastically impacted the budgets of not only individuals, but also states. State revenues have declined due to delays in income tax collections along with decreases in revenue brought in from sales tax. Meanwhile, state expenses are rising as unemployment claims have spiked. Because of these changes and the growing mismatch between revenues and expenses, many states have revised their 2020 fiscal projections to reflect potential budget shortfalls. Though some states may receive aid from the federal government to cover deficits, many may still need to dip into reserve accounts, commonly referred to as rainy day funds. 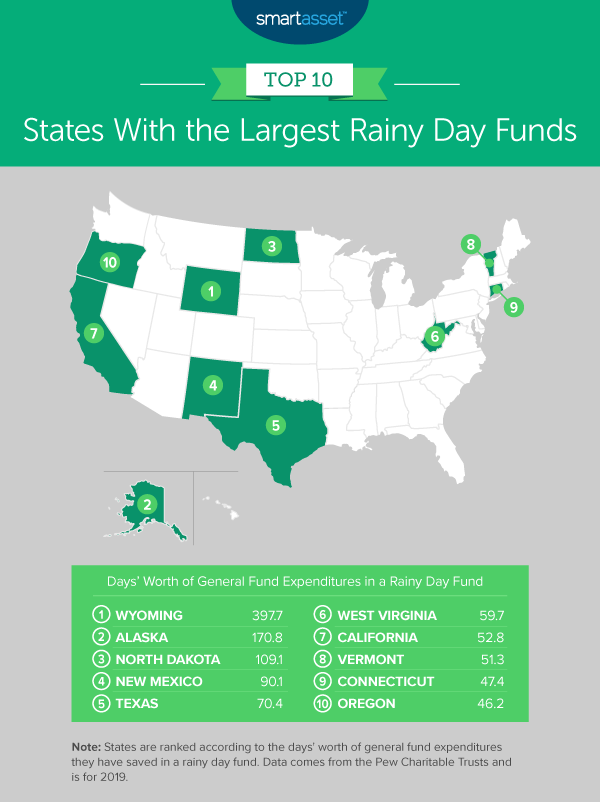 While Wyoming has the largest rainy day fund of any state, it is one of six states – along with Kentucky, Maryland, Nebraska, North Carolina and Ohio – that does not have specific conditions for withdrawing money from the fund. As noted by the Pew Charitable Trusts, with no set conditions to use the money, Wyoming has grappled with the question of when to use the money and how bad conditions need to be before tapping into its large balance.

The price of oil recently fell below $0, creating significant revenue headwinds for Alaska, whose economy heavily depends on the petroleum sector. In the state’s most recent forecast from the Department of Revenue, analysts predict a $527 million shortfall in general fund revenues for the 2020 fiscal year from previous projections. Luckily, Alaska has a large rainy day fund – totaling close to $2.30 billion in 2019 – that may help cover expenses. Data from the Pew Charitable Trusts shows that Alaska’s rainy day fund could cover about 171 days’ worth of general fund expenditures. Moreover, Alaska is one of the eight states that can use rainy day funds if there is revenue volatility.

While North Dakota Legislative Council’s April 2020 report does not indicate an overall budget shortfall from expected forecasts, it does show a 59% and 31% decline in individual and corporate income tax collections, respectively, in March this year compared to original predictions. This decline would qualify as a forecast error, the condition for withdrawal for North Dakota’s rainy day fund.

Texas does not collect income taxes, but its average state and local sales tax rate is 8.19%, the 12th-highest in the U.S. More than half of Texas state revenues come from sales tax collections, which have been hit hard by store closures and social distancing measures. Texas’ rainy day funds may be able to aid in budget shortfalls during 2020. In 2019, it had more than 70 days’ worth of general fund expenditures saved in its rainy day fund. Moreover, Texas is able to withdraw money from the fund under two conditions: economic volatility and budget gap.

West Virginia is one of 18 states in which a budget gap is a condition for withdrawal for rainy days funds and has the sixth-largest rainy day fund of all 50 states. In 2019, West Virginia had about $753 million saved in a rainy day fund, according to data collected by the Pew Charitable Trusts. With $4.60 billion in general fund expenditures during that same year, West Virginia’s rainy day fund would cover about 60 days’ worth of state spending.

Though Oregon’s rainy day fund was created in 2007, the fourth-most recent of any state – behind only Arkansas, Kansas and Montana – it is the 10th largest in the U.S. In 2019, its rainy day fund made up 12.66% of general fund expenditures, 5% more than the national median across all 50 states. Additionally, Oregon’s rainy day fund could cover about 46 days’ worth of expenditures and is tied to economic volatility. According to the Pew Charitable Trusts, this condition can be used by Oregon’s legislature to justify withdrawal from the rainy day fund if there has been a decline for two or more consecutive quarters in the last 12 months in nonfarm payroll employment – a definition that closely aligns with that of a recession.

Finally, information on revised state revenue projections during COVID-19 comes from the National Conference of State Legislatures. Its page here tracks the revised estimates to state revenues due to the economic consequences of coronavirus.

Tips for Building Up Your Personal Rainy Day Fund

Source: SmartAsset 5.20.2020 The full report, including the methodology and key findings, can be found here: https://smartasset.com/checking-account/states-with-the-largest-rainy-day-funds-2020.