by Auditor of Accounts Doug Hoffer Imagine how you’d react if someone told you a state economic development program created 815 new jobs in Montpelier and Bennington in just a few short years. Sounds good, right? And what if, on top of that, you heard that the same program generated $20.2 million in economic development activity in those two communities? The news keeps getting better, you’d say. The Governor and the Legislature were presented with these very numbers (in April) by the Vermont League of Cities and Towns (VLCT) to press them to greatly expand the state program. There was just one problem, though – neither Montpelier’s nor Bennington’s projects have even begun! So, the actual job and economic activity numbers are the same – zero.

Lobbyists frequently pay for reports intended to bolster their advocacy. Unlike the transparent and unbiased reports from nonpartisan groups like the Legislature’s Joint Fiscal Office, materials from lobbying groups are not required to meet high professional standards. The report prepared for VLCT regarding the state’s Tax Increment Financing (TIF) program suffered from such significant factual errors that it should not have been used by the Legislature or the Executive branch as they considered TIF-related legislative proposals.

TIFs allow municipalities to withhold funds from the State’s Education Fund in order to invest in infrastructure. The Auditor’s Office is required by statute to audit TIF districts, so over the years we’ve developed expertise in this very complicated municipal financing tool. We reviewed VLCT’s report and identified many significant errors. After informing VLCT of our concerns, the report was revised, although no mention was made in it of why or how the figures changed so dramatically. 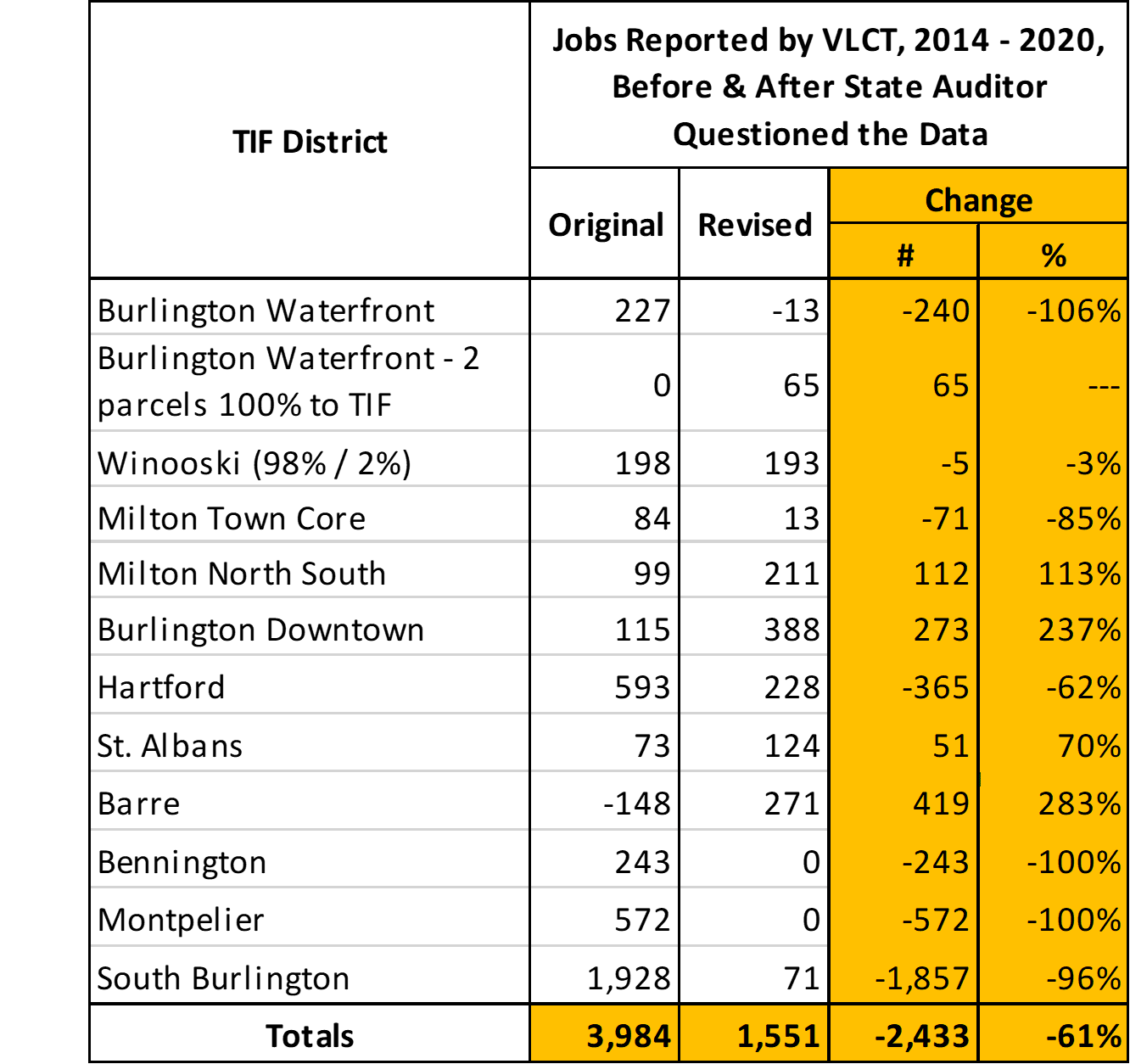 The jobs figures for the TIF program are especially unreliable. The Vermont Economic Progress Council (VEPC), which administers the program, acknowledges the problem attributing jobs to the TIF program in their 2022 annual report:

"The methodology by which jobs are counted differs by municipality, and some jobs may not be new to Vermont, permanent, or fulltime. VEPC reviews the methodologies towns use to provide this information, however, the Department of Labor does not provide data at the TIF District level so there is no way to verify the TIF District-reported numbers" (emphasis added).

Below are some examples of the report’s deeply flawed job totals:

Other significant, notable errors in the VLCT report included: Further exemplifying the unreliable nature of jobs credited to this program, the City of Burlington’s 2021 TIF report counted 150 Burlington High School teachers and staff as jobs “created” by the program, when they have merely moved temporarily out of the PCB-impacted BHS and into the empty Macy’s department store building.

This is not a question of supporting or opposing TIFs. Rather, it is a question of how we make decisions about how to spend taxpayer dollars. VLCT is a private organization, and it is their right to pay for this report. On the other hand, we believe it is so deeply flawed that it should not be cited or used by the Legislative or Executive branches. Unfortunately, before VLCT corrected the report, even the Governor cited some of the most egregious factual errors in a press statement.

One final note: Count me among the Vermonters of all political stripes who want more and better jobs and housing and economic growth more generally. It can be tempting to think “well, if it creates a single new job, it’s a good program,” or “if it creates any new economic activity, I’m for it.” But we have at our disposal unprecedented levels of federal infrastructure money and massive amounts of unexpected state general fund money. The question is not whether we should support municipal infrastructure investments, but rather how to do it at the best cost, with the least administrative complexity, and resulting in the broadest benefit to communities across Vermont.