Vermont Business Magazine Green Mountain Power (GMP) is urging safety for customers and is prepared to respond to possible outages as a spring storm rolls across the region Thursday, bringing heavy, wet snow to higher elevations which forecasters say could tear down trees and power lines overnight. Southern and central Vermont, especially at elevations above 1,000 feet, are most at risk.

The Vermont Agency of Transportation also released this statement Thursday: "With the confidence level growing of significant snowfall over 1000FT in elevation, VT 108 in Stowe (The Notch) will be CLOSED starting at 7:30 p.m. Tonight 4/15/21 This allows our plow operators to focus their attention on maintaining the highways. A follow-up advisory will be issued when it re-opens."

“We track multiple forecasts for days in advance so we can respond as quickly and safely as possible for our customers. We want customers to be aware of changing storm conditions, and to be safe. Always stay far away from downed lines or trees,” said Mike Burke, Chief Field Operations Executive for GMP. “The heavy precipitation from this storm with both rain and snow could make travel tough and slow at times for anyone who has to be out on the road. Be safe!”

GMP is reminding customers of some useful items to have for any storm: a fully charged cell phone, bottled water, battery-powered flashlights, emergency phone numbers, and a plan of where to go if you were to need to leave your home. For medical emergencies, always call 911. You can find more storm safety tips on GMP’s website. You can report outages by calling 888-835-4672, through GMP’s online Outage Center, and through GMP’s app.

VTrans: VTrans maintenance crews will be out during the storm clearing and treating roadways as necessary. Be courteous while on the roadways and give these hardworking crews the room they need to work. Drive Safely! and Don’t crowd the plow!

A developing nor'easter was beginning to bear down on the Northeast on Thursday, bringing major weather changes to the region. AccuWeather meteorologists, who have been keeping tabs on the storm all week, warn that it will strengthen quickly enough to unleash a soaking rain and colder air in New England and the upper part of the mid-Atlantic and a heavy snowfall in the higher elevations in true nor'easter fashion into Friday.

A nor'easter is simply any large storm that brings northeasterly winds along the Atlantic coast of North America, according to the National Weather Service (NWS) definition.

Even though explosive strengthening is not expected, the storm will develop enough to cause winds to increase along the upper mid-Atlantic and New England coasts to create nor'easter conditions. Winds from the northeast are forecast to pick up and average 15-25 mph with gusts up to 40 mph from northern New Jersey to Maine at the storm's peak during Friday and Friday night. Few problems are expected from the storm's winds other than creating a period of rough seas along the coast and over offshore waters of New England. 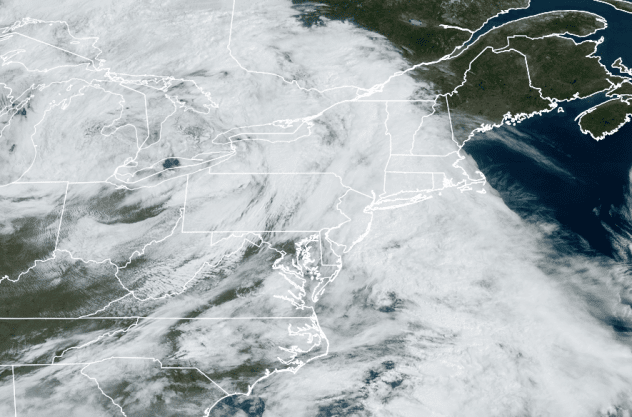 In this satellite image, clouds can be seen gathering along the mid-Atlantic and New England coasts in response to a developing nor'easter on Thursday, April 15, 2021. (CIRA at Colorado State/GOES-East)

The main impacts from the storm will be due to its precipitation.

As the storm organizes, it will tap into colder air aloft and allow rain to change to snow from high to intermediate elevations in eastern New York state and much of New England, according to AccuWeather Senior Meteorologist Brett Anderson.

"An inch of snow can accumulate at elevations as low as 750 feet, while snowfall will ramp up at progressively higher elevations," Anderson said. 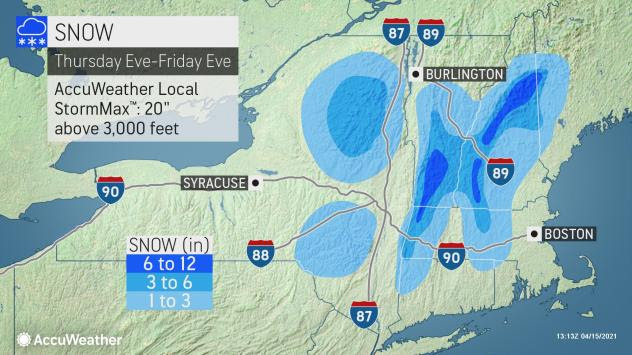 "There is even the chance that snow briefly mixes in along the coast of Massachusetts, including in the Boston area, as well as in coastal areas of New Hampshire and Maine on Friday," Anderson said.

A bit of snow is also expected to fall either mixed with rain or briefly in pure form on the mountains of western Pennsylvania, western Maryland, western New York state and northeastern West Virginia for a time on Friday.

Most of the roads at lower elevations in the Northeast will be just wet. Secondary roads that venture over the high ground can become slushy and snow-covered, even though it is the middle of April and the bulk of the snow is expected to fall during the daylight hours on Friday.

Farther north, where the weather is expected to be even more wintry late this week, the warm trend has even more notable. Boston has been 4 degrees above normal through mid-April. Interior areas like Pittsburgh have had even more extreme departures from normal. The Steel City’s average temperature through April 14 was 5.7 degrees above normal.

AccuWeather, recognized and documented as the most accurate source of weather forecasts and warnings in the world, has saved tens of thousands of lives, prevented hundreds of thousands of injuries and tens of billions of dollars in property damage. With global headquarters in State College, PA and other offices around the world, AccuWeather serves more than 1.5 billion people daily to help them plan their lives and get more out of their day through digital media properties, such as AccuWeather.com and mobile, as well as radio, television, newspapers, and the national 24/7 AccuWeather Network channel. Additionally, AccuWeather produces and distributes news, weather content, and video for more than 180,000 third-party websites.

Green Mountain Power (GMP) serves approximately 266,000 residential and business customers in Vermont and is partnering with them to improve lives and transform communities. GMP is focused on a new way of doing business to meet the needs of customers with integrated energy services that help people use less energy and save money, while continuing to generate clean, cost-effective and reliable power in Vermont. GMP is the first utility in the world to get a B Corp certification, meeting rigorous social, environmental, accountability and transparency standards and committing to use business as a force for good. GMP earned a spot on Fast Company’s Most Innovative Companies in the World list four years in a row (2017, 2018, 2019, 2020).  In 2019 GMP was honored by the Vermont Chamber of Commerce and Vermont Business Magazine with the Deane C. Davis Outstanding Vermont Business of the Year Award.